To say Pensacola, Florida based artist Valerie George is not your typical recordist would be an understatement. Rather than fighting background noise, she embraces it. Instead of building a temple of sound and hoping people would show up, she loaded everything into a biofuel-powered 1983 Mercedes 300TD wagon and took it directly to the artists. Her Car Kit is more than part art project and part recording studio, it's an instrument itself.

What is time-based media?

Art that's not a 3D or 2D object. It's any art that happens over a period of time. In the art world, we consider time-based media to be 4D.

Do you have a background in recording?

I have none! My language is shot full of holes and I use a lot of my own terms because I learn as I go. This project is my first one. I began because I'm a visual artist. That's what I studied in grad school. I'm also a musician, so I started thinking about merging the two. Drums are my main instrument and I thought about what it would be like if I mounted drums to the roof of my car. What would they sound like when the rain hit them while I drove? It was exciting to think about and naturally I thought about how to record it. I needed to build a studio in my car! My first setup was just this janky thing with contact mics on the drums, cables running through the sunroof and duct tape sealing it up to keep out the water. After making some recordings, I realized I could have fun processing and manipulating what I had captured.

Where did you get the contact mics? How did you find the gear you needed?

The mics are from this wonderful woman at Cold Gold Audio in Vancouver, Canada. I bought an old PreSonus FirePod [now FP10], which meant I had up to eight mics with which to work. I could record multiple things at once! Later I added an extra battery and switch to the car to keep me from draining it completely — so I wouldn't get stuck. I rebuilt the alternator from a John Deere tractor and installed that so I could charge all of it really fast. An inverter powers everything, including any [stompboxes] I may be using. All of the sound gets recorded into a very old Mac. I collect the tracks in GarageBand, but export them to other programs for mixing.

What other things do you keep in the car?

Various mics and effects pedals. There are contact mic rigged things, like a taped together bundle of sticks and some skateboards you can "play" the wheels on. I also have an old Roland CR-8000 CompuRhythm drum machine from the '80s. It emits some sort of EMF waves that will blow speakers, even if the amp is across the room and the output of the machine isn't hooked up! Sound somehow comes out of the amp anyway, and eventually blows the speakers. We wrapped it in 10 layers of tinfoil and it fixed the problem.

So the car was loaded and ready to go! What did you do next?

At that point I realized if I could record the drums that were mounted to my car, I could record anything else, anywhere. I got this idea to record musicians in their natural environment and videotape it at the same time. The U.S. is a beautiful place that bands have been touring for awhile. I wanted to record the landscape and work with all the brilliant musicians that were all over the country, whom I've met over the years. My bandmates and I went on tour during the summer of 2010 up the East Coast, and then along the border, through Fargo, continued to Seattle, then dropped down to Los Angeles. We stopped in towns all along the way. We recorded everyone, from Rymodee of This Bike Is A Pipe Bomb to Terry Berlier who works at Stanford and makes and plays her own musical sculptures. I've also taken trips to specific places for festivals, like South By Southwest. I do all of my recording outside.

Tell me about a typical field recording session.

Well, they are all different. On tour, I let the musicians choose the location. They would know of a beautiful place that had wonderful sounds, because they were from there. We would take background noise into consideration. I can keep the monitors out of the way of the mics and [minimize bleed], so even though I have the ability to monitor through headphones I never do.... 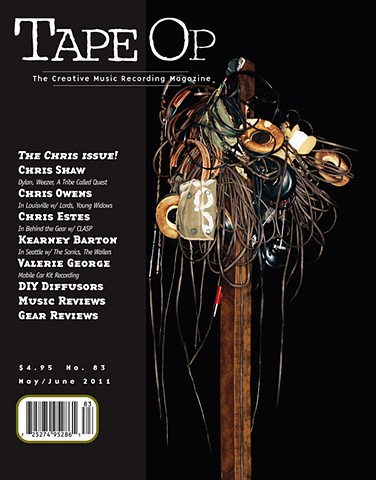