Tom Tom Magazine: How long have you been playing the drums? Valerie George: I began teaching myself on my 30th birthday, so almost five years.

TTM: What got you into drumming? VG: Many things, collecting records, growing up and living as an adult among a tight community of musicians and people who support them, but seeing Scout Niblett in San Francisco was a notable inspiration. I had always loved her organic drumming style: simple, not flashy, yet creative and engaging. She played drums and guitar simultaneously; I was awestruck and I was sold on drumming. I started snooping around for a kit to practice with. Teddy, the drummer from this Bike Is a Pipe Bomb, lent me his well-loved and well-traveled vintage Slingerland kit. I bought my own kit last year, and I oscillate between the two. Being a sculptor, a maker, I think that drums are the most beautifully crafted objects that I have ever seen or heard. I am utterly in love.

TTM: What is your current project about? VG: A few years ago I bought a 1983 Mercedes 300TD station wagon that quickly became an obsession, and a project in and of itself as I tried to keep the heap running while converting it to bio-diesel. Simultaneously, my artistic interests were turning to research and explorations of sound as my abilities in playing music evolved. The local music scene and some inventive kids were also influences that fanned the fire. I wanted to have the ability to record video and sound projects, to make noise and play music in remote locations, but became frustrated by always being hampered by the lack of electrical sources. I could only go as far as the extension cord plugged into a “borrowed” socket would allow. I realized that my car could provide a perfect solution. I now have a rolling recording studio and PA system. The car provides unlimited possibilities. With each project, I use the car like an instrument reacting to or “being played” by my environment, therefore the meaning of each video/performance/recording produced with its help, is contingent upon the content and context.

TTM: What is your plan for the drum car? VG: This summer, I am to take it on tour through the south east and on to San Francisco, stopping at selected remote landscapes to record songs that I compose on site. I am performing with inherent sounds of the sites, amplified with contact mics and/or hydrophones, so that each sound becomes an important textural aspect to its song. The performances will be videotaped for viewing in the gallery setting and the songs will be released on vinyl. Photo by John Dougherty

TTM: Was it difficult to install the drums? VG: It was easy once I decided to abandon the original sculptural approach of fabricating a chrome drum rack to mount to the roof rack of my car. The designs never felt appropriate; they were bulky, inorganic, and limiting. It was important that the drums appear to be natural extensions of the car. I decided to let the form follow the function and utilized chrome parts manufactured specifically for drum kits. I installed new hardware on the drums themselves, and it then came together nicely.

TTM: What inspired you to put drums on your car? VG: I was driving thru a powerful storm in Pensacola, and the sound of the rain pounding on the roof and hood made me curious to hear what that force might sound like on a finely tuned set of drums. Then I got the idea of writing a song specifically for a hurricane. Now that the drums are built, and have been tested, I am waiting for a small hurricane, if there is such a thing. I suppose I could settle for a tropical storm, but nah. When my perfect storm arrives, I’ll produce a video where I play my composition on multiple instruments from inside of the car, as it seemingly drives itself through the storm.

TTM: How does it work? VG: A contact mic is taped to the underside of each head, run through the rain proofed (saran wrapped and duct taped) sunroof to inside of the car and plugged into the mixer. The drums are adjustable, having the ability of being positioned to be played from the roof by the rain, a sprinkler, or some brave soul, through the windows by passengers inside of the moving car, or by players standing on either side of the car when parked.

TTM: What do you anticipate the different sounds in the different landscapes to be? VG: I have experimented in local landscapes, and in each, I focused on a different aural element: wind, water, waves, birds, leaves, other cars, –even woodpeckers. I have few expectations of what I might audibly encounter at future sites, but mostly I am excited about unpredictability of both sound and the settings that each chance provides. Sort of like aural found object compositions.

TTM: What has been the reaction to the car? VG: Most people have a strong reaction to it in general, being that it’s a tank of a car, though in some peoples minds, a collectible one. As an instrument/art car, only my colleagues, friends, band mate and students have experienced its potential, and they love it. My family thinks that the whole thing is strange, but that’s nothing new. It’s an occupational norm. In March, I plan to take it to South by Southwest in Austin, Texas to play the outer circuit of the festival. That will be the litmus test. I’ll keep you posted, but summon the gods for rain.

TTM: What else do you do musically/artistically? VG: Musically, drumming is my passion and is my most effortless instrument. I sing, play bass, tinker on keyboard, and make sounds on the guitar with the help of some pedals. I am trained as a visual artist, and I do everything adeptly but paint. I am a terrible painter

TTM: Do you have future plans to install drums on other vehicles? VG: Yes, of course. A fleet of 18-wheelers covered in cowbells, NO, kidding. I do have a golf cart, which is next on the list for a mobile project. We shall see….

TTM: How do you inspire your students to come up with projects? VG: I foster community in the classroom; my students learn to collaborate, experiment, and play. My projects are designed to encourage students to trust their instincts and their impulses, and are not limited to any particular medium once out of the foundation classes. For example, I had a student who recorded extraordinary sounds of crustaceans that he had swimming in a kiddy pool, another who taught himself how to repel and lived in a tree for three days. He videotaped himself wildly costumed, flying through the air. It was gorgeous. My students constantly amaze me with their bravery and creativity. No one would have supported these ventures as art when I was a student, and that was a problem. I teach them how to contextualize their abstracted thoughts within the framework of art and social history, not to be limited by what art was, but to be inspired by what it might become.

TTM: If money were not an issue what project would you do? VG: Jeez, money has never been a non-issue. It is hard to imagine a world in which I could do anything. But… I would really pimp this ride! I built it pretty low budge, so I would max out its capabilities and go travel around in it until I couldn’t stand it anymore. I would seek out people in each stopping point to collaborate with and play drums to every sunset. Then, once I settled on the perfect, cool community, my best friend and I would open an art space, with an adjacent all-ages experimental practice and show venue, for artist and musicians. There would also be a furniture store somehow connected, as we are both mid-century mod geeks. 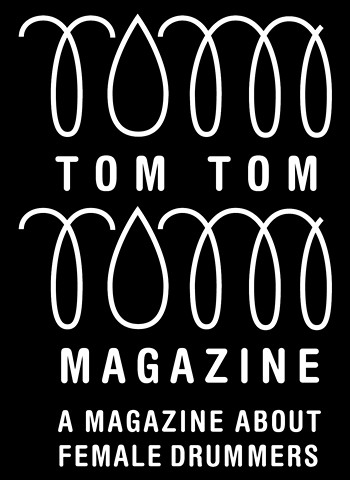 TomTom Magazine Art, Drummer of the Week
< previous next >